Testimony of a Trappist monk

Posted on January 29, 2012 by stayingfaithful 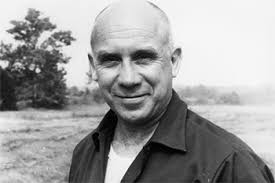 Before he was converted, Thomas Merton was brought up by parents who were not really self-proclaiming Christians.  I’m reading ‘Seven Storey Mountain’ now, which is his autobiography.  The work of his I have read so far, such as ‘No Man Is an Island’ and ‘Seeds of Contemplation’, have astounded me and enriched my spiritual journey immensely.  I’m so excited as I read about his own path to discovering God:

I did not even know who Christ was, that He was God.  I had not the faintest idea that there existed such a thing as the Blessed Sacrament.  I thought churches were simply places where people got together and sang a few hymns.  And yet I tell you, you who are now what I once was, unbelievers, it is that Sacrament, and that alone, the Christ living in our midst, and sacrificed by us, and for us and with us, in the clean and perpetual Sacrifice, it is He alone Who holds our world together, and keeps us all from being poured headlong and immediately into the pit of our eternal destruction.  And I tell you there is a power that goes forth from that Sacrament, a power of light and truth, even into the hearts of those who have heard nothing of Him and seem to be incapable of belief.

That paragraph made me gasp.  I am really enjoying reading the descriptions of America, and France, and even England, through the eyes of a very discerning and observant individual, a sensitive and yet large spirit.  He speaks of how his rejection of his younger brother had within itself the evidence of sinfulness:

I suppose it is usual for elder brothers, when they are still children, to feel themselves demeaned by the company of a brother four or five years younger, whom they regard as a baby and whom they tend to patronise and look down upon.  So when Russ and I and Bill made huts in the woods out of boards and tar-paper which we collected around the foundations of the many cheap houses which the speculators were now putting up, as fast as they could, all over Douglaston, we severely prohibited John Paul and Russ’s little brother Tommy and their friends from coming anywhere near us.  And if they did try to come and get into our hut, or even to look at it, we would chase them away with stones.

When I think now of that part of my childhood, the picture I get of my brother John Paul is this: standing in a field, about a hundred yards away from the clump of sumachs where we have built out hut, is this little perplexed five-year-old kid in short pants and a kind of a leather jacket, standing quite still, with his arms hanging down at his sides, and gazing in our direction, afraid to come any nearer on account of the stones, as insulted as he is saddened, and his eyes full of indignation and sorrow.  And yet he does not go away.  We shout at him to get out of there, to beat it, and go home, and wing a couple of more rocks in that direction, and he does not go away.  We tell him to play in some other place.  He does not move.

And there he stands, not sobbing, not crying, but angry and unhappy and offended and tremendously sad.  And yet he is fascinated by what we are doing, nailing shingles all over our new hut.  And his tremendous desire to be with us and to do what we are doing will not permit him to go away.  The law written in his nature says that he must be with his elder brother, and do what he is doing: and he cannot understand why this law of love is being so wildly and unjustly violated in his case.

Many times it was like that.  And in a sense, this terrible situation is the pattern and prototype of all sin: the deliberate and formal will to reject disinterested love for us for the purely arbitrary reason that we simply do not want it.  We will to separate ourselves from that love.  We reject it entirely and absolutely, and will not acknowledge it, simply because it does not please us to be loved.  Perhaps the inner motice is that the fact of being loved disinterestedly reminds us that we all need love from others, and depend upon the charity of others to carry on our own lives.  And we refuse love, and reject society, in so far as it seems, in our own perverse imagination, to imply some obscure kind of humiliation.

I suppose all of us have inflicted similar cruelty on siblings if we have had them, at points in our past.  But Merton is capable of glossing these events in a masterly way.  He talks about going through a religious ‘phase’ in an English school, and he comments that most of us have a religious phase, and usually ‘nothing more’ than that.  ‘If the impulse to worship God and to adore Him in truth by the goodness and order of our own lives is nothing more than a transitory and emotional thing, that is our own fault.’ Not only is Merton capable of distinguishing the different threads of the soul with a scalpel-like precision, but he is also capable of poetic, sentimental and yet wholly divine eulogy, on which I’ll end for now:

How did it ever happen that, when the dregs of the world had collected in western Europe, when Goth and Frank and Norman and Lombard had mingled with the rot of old Rome to form a patchwork of hybrid races, all of them notable for ferocity, hatred, stupidity, craftiness, lust and brutality – how did it happen that, from all this, there should come Gregorian chant, monasteries and cathedrals, the poems of Prudentius, the commentaries and histories of Bede, the Moralia of Gregory the Great, St. Augustine’s City of God, and his Trinity, the writings of St. Anselm, St. Benard’s sermons on the Canticles, the poetry of Caedmon and Cynewulf and Langland and Dante, St. Thomas’ Summa, and the Oxoniense of Duns Scotus?

For more on Merton, see  Paul Pearson’s chatty discussion (y’know) with Judy Valente, or the Thomas Merton Centre and International Society website.  Everything that Merton wrote seems to throw out a challenge to me.  He said famously: “A life is either all  spiritual or not spiritual at all. No man can serve two masters. Your life is  shaped by the end you live for. You are made in the image of what you desire.”

I am looking for anything that relates to life and to a fuller life. I am bored by the normal and the natural and interested in the supernatural. There must be more than this. We were put on this earth for more than a nine to five prison, as someone said a few years ago.
View all posts by stayingfaithful →
This entry was posted in devotion and tagged blessed sacrament, daily life, mountains, pleasing God, reading, seven storey mountain, thomas merton. Bookmark the permalink.